Much like the knee design a while back, I wanted to improve on many of the standard designs for shoulder joints seen in action figures on the shelves.  To start, I decided I wanted to incorporate a rolling shoulder design in addition to the normal shoulder joint that you see on every figure.  This isn’t that unusual, and if you haven’t seen it, a rolling shoulder makes a world of difference to the realistic pose-ability of your figure.  Without it, you end up with very stiff ‘action-figurey’ poses instead of the more human poses seen in higher-end figures. 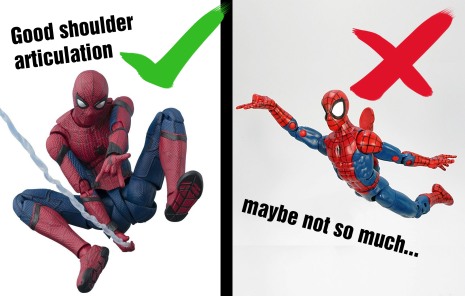 There are already plenty of good examples of rolling shoulder designs on the market.  Many of them use a ball joint deep in the chest which the outer joint is attached to.  This is fine for smaller 1/12 scale figures, but I was concerned about a ball joint reliably holding a pose on a figure this size.  I also wanted to avoid the ball joint since it would allow the shoulder to move on 3 axis, and I wanted to limit it to 2 (being able to move forward-backward and up-down without rotating).  To solve this, I put two single-axis joints together inside the chest cavity.  This gives the joint all the movement I wanted it to have.  I also put a ratcheting ring in each of the joints to help hold poses.

The shoulder blade went through several different iterations before I had something I thought would work.  At first I thought of putting in sliding joints on ball joints, all this complicated stuff that would be really unreliable, prone to breaking and would most likely get stuck too frequently to work.  Instead, I put the whole scapula on a small rotating piece on the back.  The scapula is attached with ball joints on the shoulder and rotating piece to give it freedom of movement. 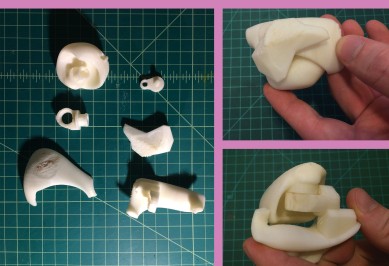 While this prototype isn’t perfect, it turned out far better than I expected for a first attempt.  Everything works as intended, and it actually looks really cool when it moves.  Something about adding that shoulder blade in gives the movement a very natural, organic feel.  There are still changes to be made before moving onto the final version, but this will do for now.  This piece was probably the most experimental part of the figure, and the one I was most concerned about getting to work.  But holding a working version in my had is deeply satisfying.  I’m feeling a little more confident about everything else.

There was an error retrieving images from Instagram. An attempt will be remade in a few minutes.